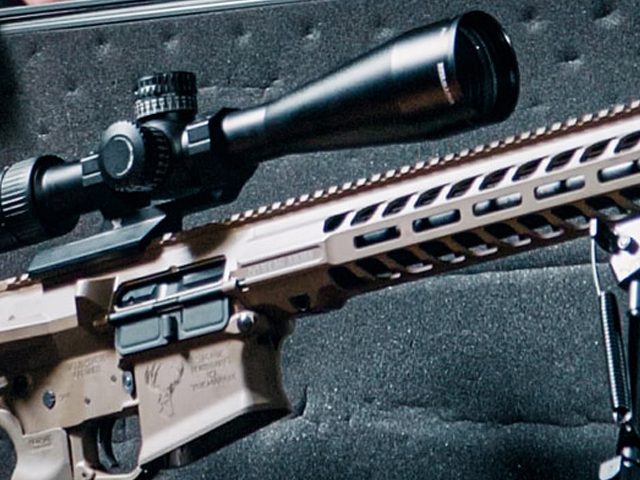 White Wolf’s Stag Arms to relocate from CT to WY

Stag Arms LLC (“Stag” or the “Company”) is pleased to announce the appointment of a new President as well as its new location.

Stag’s Board of Directors today announced that Chad Larsen has been appointed Stag’s President effective immediately. The Company also announced that it will be relocating to Cheyenne, WY, by the end of the year. In June, the Company disclosed its decision to move from Stag’s former headquarters in New Britain, CT, and accordingly initiated a national search for a new location.

In making today’s announcement, Elie Azar, Founder and CEO of White Wolf Capital, which owns a controlling interest in Stag Arms, said: “We decided it was time to do a complete refresh of the Company. We needed to solve for three things: visionary customer-centric leadership, a business-friendly, pro-growth economic environment, and a cultural climate that reflects Stag’s brand image of independence and free spiritedness. I am pleased to report that we have found a solution that hits all these points.”

To find a new location for the Company, Stag’s Board of Directors conducted a rigorous process comparing dozens of potential sites against a stringent set of criteria. “Cheyenne came out on top on most of the individual criteria,” said Azar, “and considering our requirements as a whole, it was by far the superior site. Not only is Wyoming an incredibly hospitable place to do business, it is also a top destination for outdoor recreation, including hunting and shooting sports, which reflects its citizens’ unwavering support for the Second Amendment.”

Wyoming Governor Mark Gordon, upon learning of Stag’s decision to relocate to his state, issued the following statement:

“I am pleased to welcome Stag Arms to Wyoming and to know that our state came out on top of a broad look at potential new homes for the sought-after company. We have a deep-seated commitment to the Second Amendment that I will continue to uphold. Ultimately, Stag Arms had to make a business decision and I believe this announcement is an affirmation that Wyoming is continuing to cultivate a culture that allows private enterprise to flourish. My administration will work collaboratively with the Wyoming Business Council and Cheyenne LEADS to ensure Stag’s move goes smoothly. I thank Stag’s Board of Directors and Chad Larsen for selecting Wyoming.”

Stag began working with Cheyenne LEADS, the economic development organization for Cheyenne and Laramie County, in June of this year after they reached out offering their assistance. LEADS assisted with site location, workforce evaluation and navigating the community.

Stag’s decision to relocate to Wyoming follows similar recent moves by other firearms companies, most notably Weatherby and Magpul. In addition to being firearm-friendly and outdoor-oriented, Wyoming has been very proactive in its efforts to attract high-skilled/high-paying manufacturing jobs to the state.

Communities like Cheyenne have invested significantly in recent years in skilled training capabilities.

Chad Larsen comes to Stag from Aero Precision, LLC, a leading manufacturer of AR-15 components located in Tacoma, WA, where he spent the last six years leading new product development. Azar noted, “Chad’s innovative genius with the Modern Sporting Rifle platform stems from his personal emersion in the shooting and hunting community. He knows what customers want—and what they don’t—because he is one of them.” Mr. Larsen is both an avid hunter and a registered 3-Gun, Multi-gun and USPSA competitor.

Mr. Larsen added, “I am both honored and humbled to have been selected to lead the charge to revitalize this iconic brand. The Stag team and I are totally committed to continuing Stag’s legacy of innovation—for example, we were the first AR platform to manufacture left-handed rifles—as well as continue our pledge of being 100% made in the United States.” Mr. Larsen succeeds Anthony Ash who was president of Stag since 2016.

Stag has begun the process of relocating all of its operations to Cheyenne and plans to be fully settled in its new accommodations in the upcoming months.